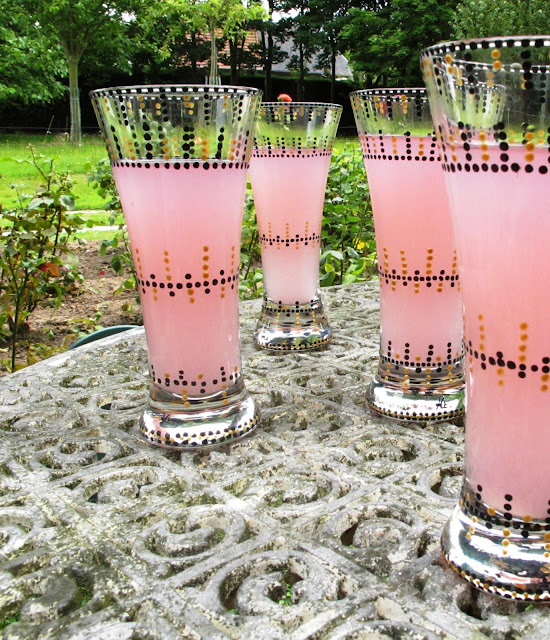 For me the very best thing of being on a holiday is the discovering of new flavors, new ingredients, new dishes! The last couple of weeks we stayed in Colleville-sur-Mer a little pittoresk town in the French region of Calvados. Calvados, where the real deal apple brandy 'Calvados' comes from. This means that in every town - how insignificant and small it may seem - you will find an apple orchard and a cider and apple farm on the corner of the street. Most of these apple farms also keep bees to produce the most wonderful apple blossom honey. To be surrounded by so much attention to local food culture and so many food craft skills made me very humble and blessed. It's very easy to ridicule the French protection of domestic products. But by doing so you definitely underestimate the experience of really connecting with your local environment. It's amazing how much satisfaction you get from opening a bottle of cider knowing you are thereby supporting your local apple farm. It's marvellous and I can highly recommend it! 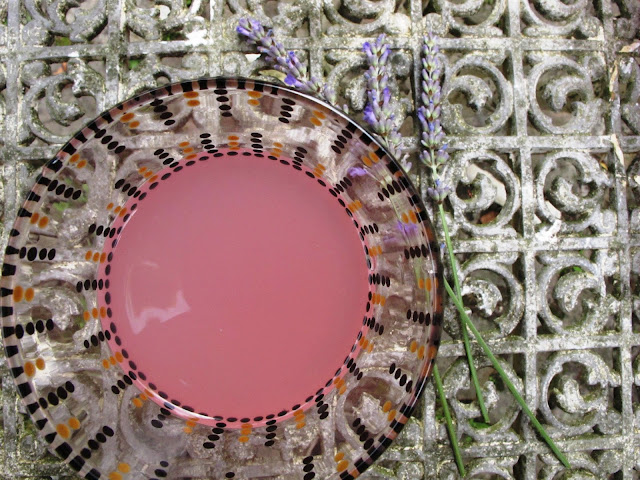 The French kitchen doesn't have much secrets anymore after kitchen goddess beyond praise Julia Child revealed the three most important ones: butter, butter, and butter. And indeed, butter plays a leading role in French cuisine and is very important for the local Normandy economy. Last week we visited a caramel factory in Isigny-sur-Mer. There you could watch the factory craftsmen making caramel fudge from scratch using only locally produced milk, butter, and sugar. At the factory we were told that because of the Wall Street Crash of 1929 the Normandy dairy farmers had a major milk surplus and didn't know what to do with it. The local chef and foodie avant la lettre Ernest Fleutot decided to process the milk in a unique recipe making milk caramel bonbons. The recipe of Ernest Fleutot has been perfected ever since and is now known as caramel fudge: soft, sweet caramel goodies. 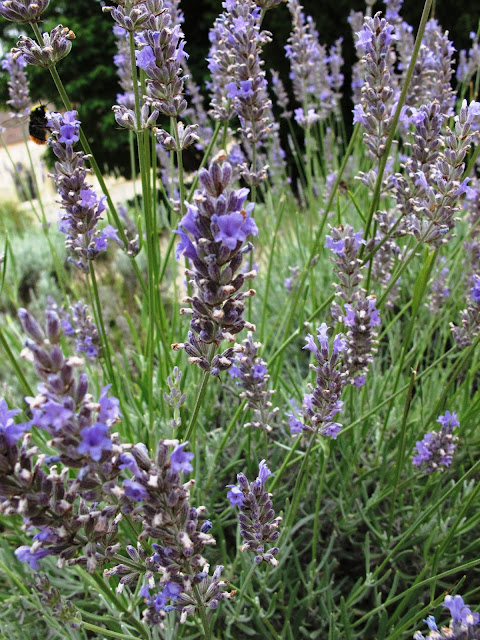 No offence to butter but if I had to pick one flavor that will immiately take me back to the French countryside I would choose lavender. During summertime everywhere you go French lavender blooms lushly: in the medicinal herbgarden of the Castle of Caen, in the kitchen garden of the castle in Falaise where William the Conqueror was born, even on roundabouts in downtown Bayeux! Rich bundles of purple flowers waving in the wind or curving under heavy rain. Whatever the precariously Normandy summer will come up with: the lavender will surly air its scents and every day buzzing bumblebees and honeybees will visit its flowers. 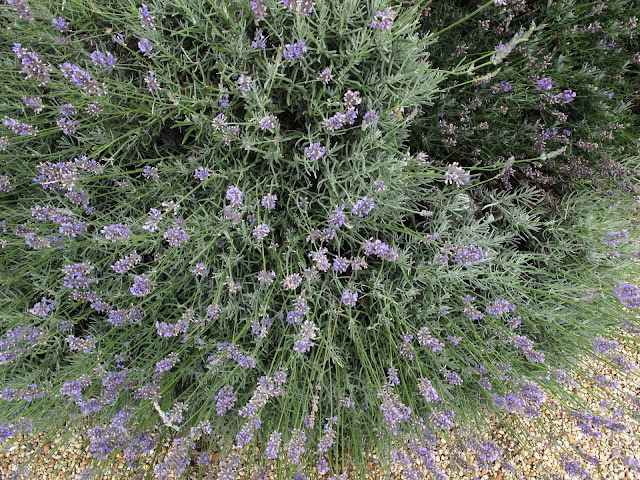 The history of lavender goes way back to antiquity when it was considered a very valuable and even holy herb. Lavender was then called nard after the Syrian city of Naarda and is mentioned in the biblical Song of Salomon. The Song of Salomon is an ode to love and is full of allegories. In chapter 4, verse 12-15 the groom sings for his bride:

'A garden inclosed is my sister, my spouse; a spring shut up, a fountain sealed. Thy plants are an orchard of pomegranates, with pleasant fruits; camphire, with spikenard. Spikenard and saffron; calamus and cinnamon, with all trees of frankincense; myrrh and aloes, with all the chief spices: a fountain of gardens, a well of living waters, and streams from Lebanon.'

I don't know about you but if I would receive such a declaration of love today I would definitely date the guy. If it wasn't for his originality then definitely to tell him that comparing me to a sealed fountain maybe isn't the fastest way to my heart. The Latin lavandarius (from the verb lavare which means to wash) inspired Linnaeus to call the plant Lavandula. Lavandula has different cultivars like hidcote, latifolia, stoechas and the most well known angustifolia. 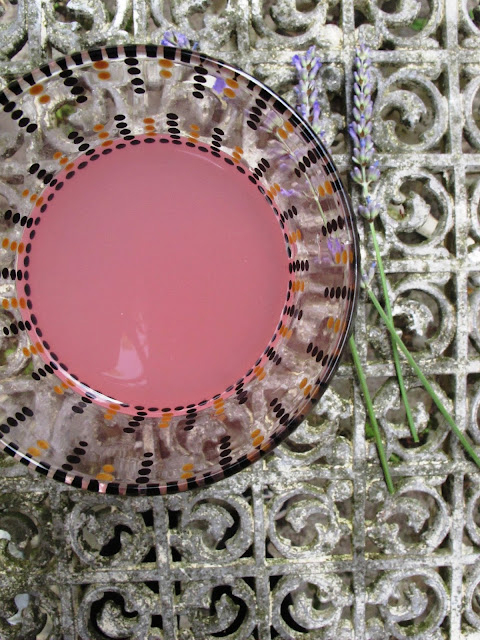 Well, that's enough information for now I think so let's move on to the lushy lavender lemonade! This lemonade has a distinctive, refreshing flavor and is thereby very suitable for a hot summer's day. You can easily adjust the taste by playing with the amounts. For instance, if you want a clear lavender taste you can use a couple of more sprigs or infuse them longer. If you want a really refreshing lemonade you can add some more lemon juice. Or if you want a sweet drink you just add some more honey, it's all up to you! The funniest part of this lemonade is the pretty pink color. The lemonade will turn pink if you add the lemon juice to the lavenderwater just like that! This little chemical kitchen experiment alone is reason enough to make this lemonade. The refreshing taste you get in the bargain! 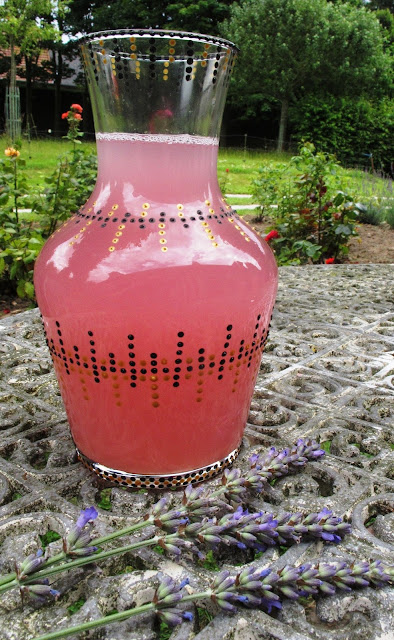 
500 ml boiling water
500 ml cold water
15 fresh sprigs of lavender (watch it: do NOT use potpourri lavender!)
juice of 5-7 lemons
a couple of tablespoons French apple blossom honey (any flower honey will do)
Optional:
slices of lemon and some ice cubes

2. Squeeze the lemons. Sieve the lavenderwater, holding behind all the sprigs and flowers.

3. And now the funniest part: pour the lemon juice in the bowl with lavenderwater and watch it turn pretty pink! Be sure to use a glass bowl so you are able to see the epic color switch! Taste. Dilute with cold water. Taste again. Add more water, lemon juice, or honey to your liking. Let cool in the fridge for at least half an hour.

Serve the lushy lavender lemonade cold with some slices of lemon or some ice cubes and picture yourself in the French countryside surrounded by buzzing bumblebees. 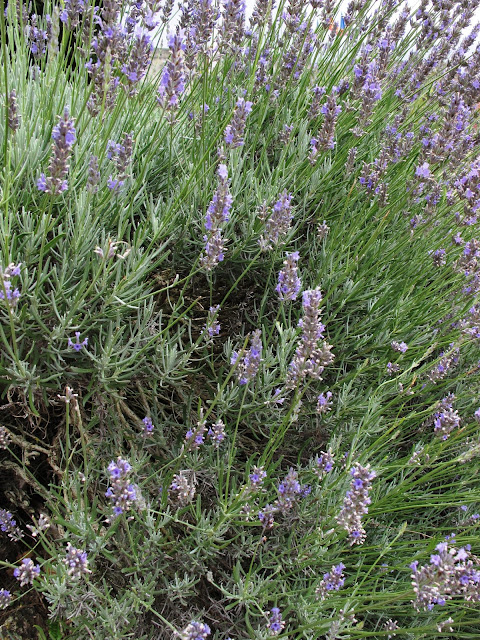 Posted by Frannie at 19:48
Email ThisBlogThis!Share to TwitterShare to FacebookShare to Pinterest
Labels: BEVERAGE, SUMMER, VEGAN