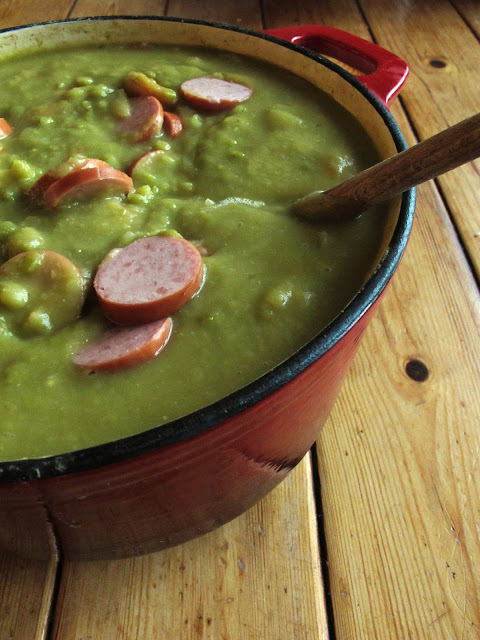 Ever heard of the iconic Dutch pea soup with carrot and celeriac? No? Then you're in for a treat! Ever since Hendrick Avercamp painted his Dutch winter landscape with ice scaters on a frozen river (c. 1608) the Dutch are known around the world as fearless ice scaters on frozen public waters like canals and pools. And after a day on the ice it's tradition (and it still is actually) to eat a warm bowl of pea soup. Nowadays we don't have many icy winters anymore unfortunately. But I think it would be a shame to let the weather dictate not only your recreation on a free Sunday afternoon in February but also your evening meal. So, pea soup it is. Without the ice scating and without the blistering cold. But with carrot and with celeriac. I'm telling you: it doesn't get any Dutcher than this. 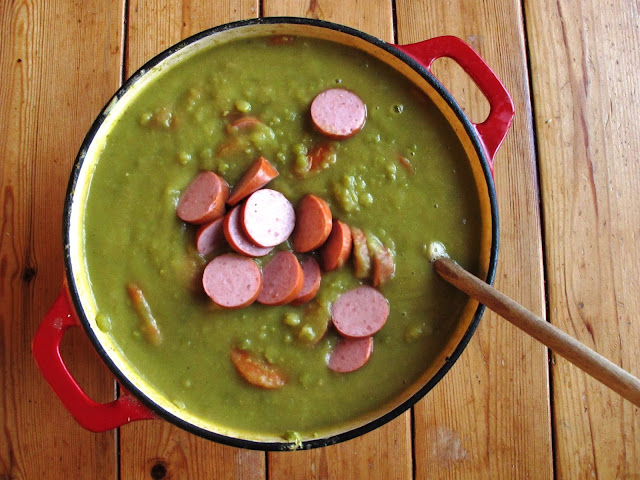 Evening meals in the Netherlands traditionally consist of potatoes, meat and vegetables. Pea soup is basically the same with the only difference that all the ingredients are put together in one large pan and cooked until very well-done. Since when pea soup is made after an afternoon of ice scating is unclear. There is however a Dutch recipe of pea sauce written in the cookbook Een notabel boecxken van cokeryen (A reputable book about cooking) dating back to 1514. The pea sauce is made of roasted bread soaked in pea purée which is sieved and than coloured (no, not 'seasoned') with ginger, cinnamon and saffron. Because the ingredients of pea soup are mainly non-perishable (dried peas and salted meat) it was a perfect meal for on the ships of the VOC. But pea soup isn't exclusively Dutch of course. In Sweden and Finland for instance they usually eat pea soup on Thursday's followed by a big pile of pancakes as dessert. What can I say, music to my ears! 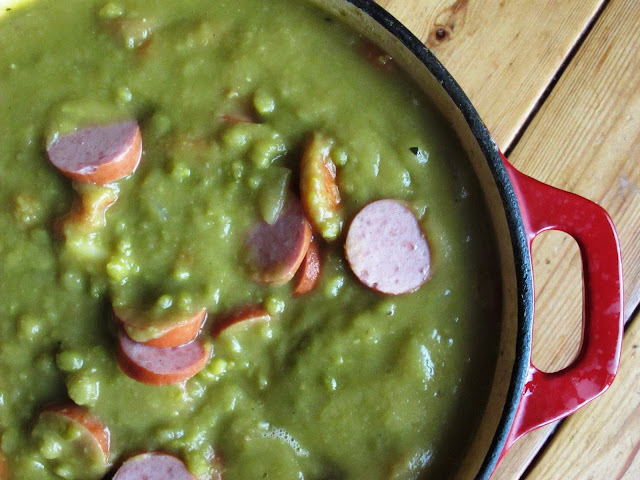 1. Cut all the vegetables in desirable sizes. Place split peas with shanks, bay leaves, water, beef stock, salt and pepper in a very large pan and bring to a boil. Turn down the heat and simmer with a lid on for about 30 minutes.

2. Add all the vegetables and let simmer again with a lid on for about 30 minutes. Stir occasionally.

3. Remove shanks. Blend peas and celeriac (try to avoid the carrots) using a immersion blender so you'll get a creamy, porridge-like consistancy. Turn up the heat for another 10 minutes while stirring.

4. Stir in the slices of smoked saucages. Serve with rye bread topped with smoked bacon or cheese. And have a blast: serve pancakes as dessert!

Pea soup will keep for three days in the fridge. Frozen it will keep for at least three months. My freezer is filled with it, so all I need now are some frozen canals.