Since I'm enjoying a very long Christmas holiday I decided to make something I rarely make: jelly! The fact that you have to throw away almost every ingredient in the end is the reason I make jelly hardly ever. It was just the same with this apple jelly. My organic waste bin was overflowing with apples, oranges and spices, such a waste. But hey, it was the week before Christmas and you want to live a little. So I cleaned some jars and got started!

Because this jelly goes very well with cheese boards and the holidays were upon us I thought it was the exact right moment to make it. Furthermore it doesn't have to ripen, mature or be fed before you can enjoy it. You can spoon it right out of the jar when it's finished, yay! Besides the obvious cheese board you can also enjoy this versitale jelly on (American) pancakes, French toast or with roast chicken. So you really needn't worry about any leftovers. 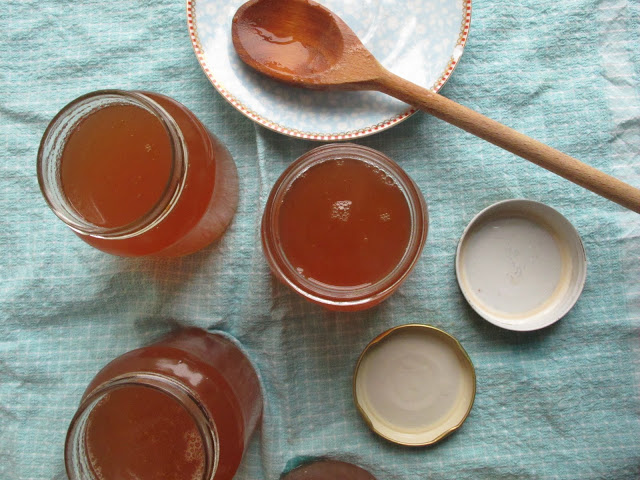 Jelly is a way to preserve fruit. Besides jelly there's chutney, confit, conserve, fruit butter, fruit curd, fruit spread, jam and marmalade. The main ingredient of jelly is fruit juice, seasoned with sugar and/or herbs and spices. Because you have to sieve the jelly you won't use any fruit bits in the final result and you will become a clear jelly. You can make either sweet, savoury or spicy jellies, for instance tomato jelly or red pepper jelly. And in the words of Ruth Berolzheimer:


'Good jelly is clear and sparkling and has a fresh flavor of the fruit from which it is made. It is tender enough to quiver when moved, but hold angels when cut.'*

Berolzheimer is right of course, but less set jelly tastes just as good and is easier to spread out on pancakes and toast!

Throughout the world there are many national jelly specialities. The most remarkable being the Hitlerszalonna ('Hitler bacon'), a dense fruit jam from Hungary. It is made of mixed fruit and sliced in brick shaped blocks, a bit like bacon. During World War II it was eaten by Hungarian troops who gave it its distinctive name. The reason they called it 'Hitler bacon' goes back to the Austrian Empire. Before World War II the Hungarian soldiers were aligned to the Austrian emperor, or 'Kaiser'. The bacon they received from the Kaiser they called 'Kaiser-bacon'. During World War II when they fell under German militairy power they called the fruit bricks provided by the Germans 'Hitler-bacon'. Hitlerzalonna is now sold by the name 'gyümölcs íz', which means 'fruit flavoured'. 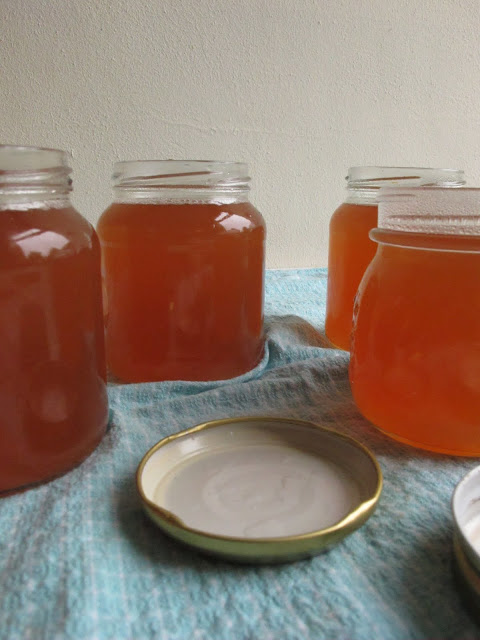 1. Wash and cut the apples into small chunks, leaving the core and peel in. Place the apples with the spices, orange peel and bay leaves in a large pan. Reserve 2 star anise, 4 cloves and 2 bay leaves for the jars. Cover the apples with 600 ml water and bring to a boil. Turn the heat down and let simmer for about 1,5 hours.

2. Place a sieve lined with a thin cloth into a large bowl (or use a jelly bag), pour the apple mixture into the sieve, leave to drip for 2 hours (or overnight). Do not push the fruit through the sieve for you will get a cloudy jelly.

3. Measure the juice. You should have about 600ml. Pour the juice into a pan together with the jelly sugar and the apple cider vinegar. Bring to a boil while stirring. Do not turn down the heat and boil for 15 minutes or until the jelly starts to set.

4. Pour the jelly in sterilized jars and put a star anise, a bay leaf and 2 cloves in each jar. Close the jars, put upside down. Chill overnight or until set.