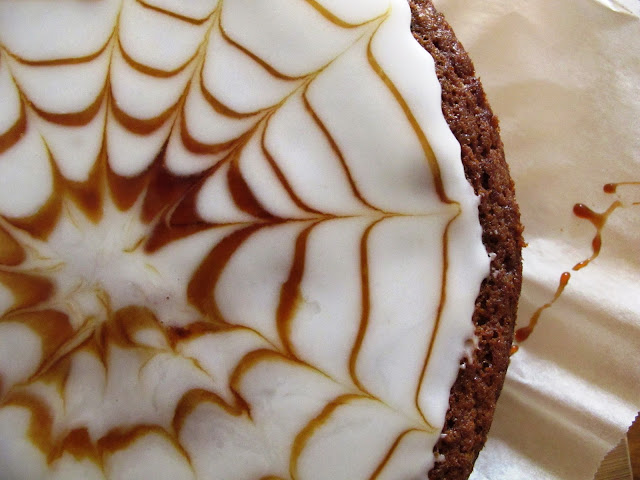 Last week I celebrated my birthday! I had a wonderful day full of party festoons, very nice and thoughtful presents (board games, cookbooks, stylish tableware to use on my blog), congratulation phone calls and of course, cake: I baked myself a pumpkin spice cake with a spider web frosting because it’s Halloween soon. Although I do not dress up like a walking skeleton and I do not visit my neighbours in search for candy - because I’m actually a hard-core scaredy-cat and won’t sleep for weeks after one scary clown’s head - still, I really like the playful cookies and other baked goods associated with Halloween, such as this pumpkin spice cake with creepy spider frosting. Seriously, is this as spooky as my Halloween gets? Yes, I’m afraid so… 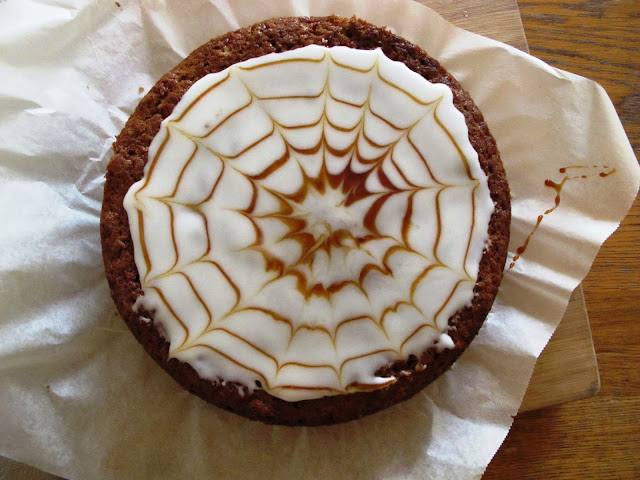 On the night of the 31st of October people all around the world – but especially in Canada, the United States, the United Kingdom, and Ireland – come together to celebrate Halloween. The name ‘halloween’ is a deterioration of Hallow-e’en, which comes from All Hallows Eve. So Halloween is the night before All Hallow’s Day which is celebrated on the 1st of November. Halloween is therefore a very old feast that incorporated Christian as well as Celtic traditions. The Celts, who lived in the United Kingdom from around the ninth century before Christ, celebrated their New Year on the 1st of November. Their New Year’s Eve on the 31st of October was dedicated to that year’s harvest and all the hard work they had done to cater to the crops. On New Year’s Day the Celts commemorated all their loved ones that had died during the last year and anticipated the homecoming of their spirits. They anticipated good spirits as well as evil spirits and they prepared themselves accordingly: the Celts would lay all sorts of food by their doors to lead the good spirits to their homes and to protect themselves from evil spirits they would wear masks. During the Middle Ages, somewhere around 850 the Irish and English came across a continental Christian tradition celebrated on the 2nd of November: All Hallow’s Day. On All Hallow’s Day Christians would cover themselves in rags and would beg for soul cakes. Traditionally these soul cakes were filled with allspice, nutmeg, cinnamon, ginger, raisins, and currants and people would bake them and give them to the poor and the beggars so their loved ones would be able to leave the purgatory a little sooner. Through time the Celtic celebration of New Year’s Eve and the Christian traditions of All Hallow’s Day moved towards each other and eventually blended together. Today people dress up for Halloween which can be traced back to the Celtic masks and go around for ‘trick or treat’ which can be traced back to the Christian beggars.

But how did the pumpkin get connected with Halloween in such an indissoluble way? Well, the Irish had something to do with that too! Traditionally the Irish made lanterns from large roots to light up their Halloween festivities, but once they arrived in the United States and came across large and round pumpkins they found them much more suitable than the roots they’d been using for decades. There you have it: the jack-o’-lantern was born! And that’s not the only way to use pumpkins around Halloween for they are marvellous in cakes! Especially if you use those traditional spices used in soul cakes centuries and centuries ago. Try this recipe and be convinced: those Christians knew what they were doing back then! 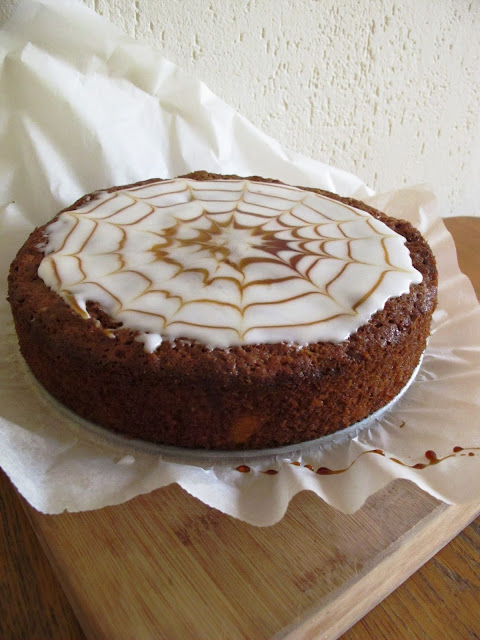 2. Grate the lemon. Mix the butter with the sugar until the mixture is light and foamy, this should take about 5 minutes. Then add the eggs one at the time. Add another egg after the last one is fully incorporated in the mixture. Whisk in the flour, the baking powder, and the spices. Then stir in the lemon zest, the whipped cream, and the pumpkin puree. Pour the batter into the baking tin and bake in the oven for about 70 minutes or until a skewer comes out clean. Place the cake on a grid and let cool down completely.

3. Make the frosting: mix the icing sugar with a couple of drops of lemon juice and stir well. Stir until the frosting is shiny and bright. Cover the top of the cake with frosting. Pour the black treacle on the frosting making a spiral figure. Then pull a skewer through the treacle from the inside of the spiral to the side of the cake, repeat until you’ve created a spider web.

Happy birthday to me! And Happy Halloween to all of you! And I’m so curious: where are you from and are you hard-core Halloween celebrators? Will you be going around your block in search for candy or do you prefer to make sweet little Halloween cookies at home? Please let me know! 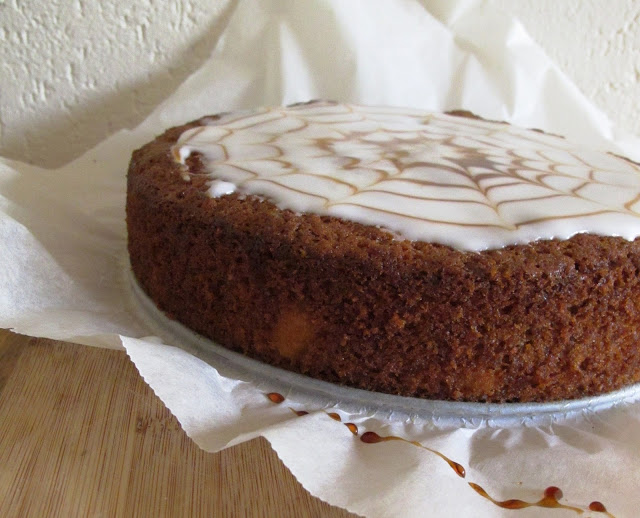