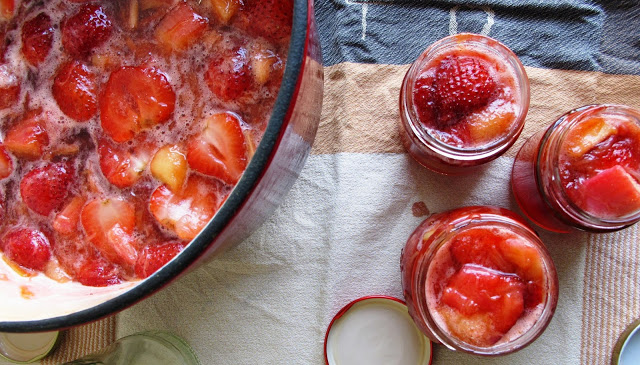 Yesterday we opened the last remaining jar blackberry jam I made in France last summer. So today's the right time to make some new supplies. For the first time this season I saw rhubarb at the grocery store and I just happen to be a huge fan of the delicious bittersweet taste of rhubarb. So it wasn't that hard to do the math: i was going to make me some rhubarb and strawberry jam! 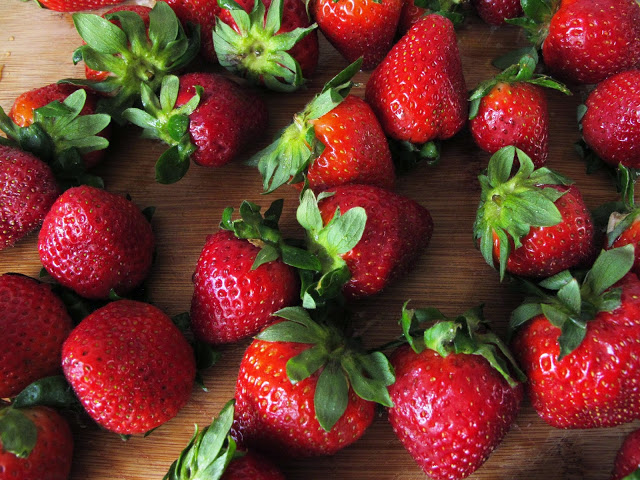 The history of rhubarb goes back at least 5000 years. Rhubarb cultivated the Asian steppes and was especially known as a herbal medicine and therefor appears in the Shennong Ben Cao Jing (The Classic of Herbal Medicine), a Chinese encyclopedia avant-la-lettre about agriculture and medicinal plants. Rhubarb came to Europa at the time of the silkroad trade and was considered highly valuable. So extremely valuable the silkroad traders compared rhubarb with diamonds, silk, pearls, rubies and musk. That goes to show! It wasn't until 1600 that British botanist and herbalist at the English royal court John Gerard discoverd the culinary uses of rhubarb. Since then and particularly since sugar became available for common people rhubarb has played the shining lead role in many wonderful dishes from crumbles to tarts and from compotes to jams.

Rhubarb's taste is bittersweet. To prevent rhubarb jam from being too sour you can add orangejuice or sweet fruit like strawberries, apples, or raspberries. Since it's their season I chose strawberries. Would you be having a boost of creativity you could combine rhubarb with fresh minced ginger, a vanilla pod or fresh mint. Totally out of character I decided this time to make jam like it's supposed to be made: with jellysugar. If you're just like me and not used to cooking with jellysugar pay close attention to your simmering pot: the fruit will set in no time! For me jam and marmalade are priceless and they are the only two recipes in which I don't really feel the need to replace the sugar for something healthier. Because I think sometimes you just have to allow yourself to indulge in the things you really love even if they are not necessarily the healthiest choices. Live a little! But for all of you wise readers out there I made a chia alternative which you can eat without any worries. Hope you like it. 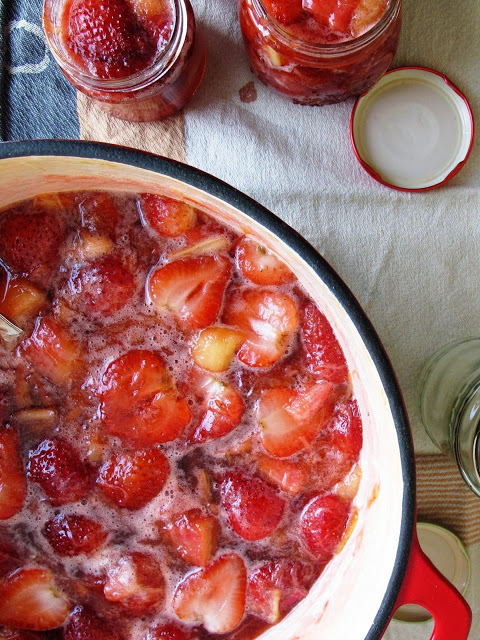 You can cut the strawberries and rhubarb as small as you wish. The smaller the pieces the more jellylike the jam will become. As I'm rather fond of recogniseable strawberries on my plate I only cut them in half. I cut the rhubarb in pieces of two centimeters but I found out that it actually really doesn't matter how small you cut your rhubarb: it will totally dissolve anyway.

1. Sterilize the jars you want to use (use your dishwasher or cook them a couple of hours in the oven). Place them on a kitchentowel alongside their lids.

2. Bring the rhubarb, strawberries, sugar, and water to a boil in a large pot on high heat. Stir well to combine. Cook for about 4 minutes and then do the 'jellycheck': drip a drop of jam on a cool plate and let cool down. Then tousle the plate. If the drop keeps its form the jam is ready. If it oozes keep it cooking a little while longer and then do the jellycheck again. Be careful not to overcook the jam for it wil get a syrupy consistancy.

3. If the jam is set take the pot off the stove. Pour the jam in the jars using a handy ladle. Close the jars and let cool down before you clean the jars. Unopened the jam will last at least one whole year but who on earth would want to wait that long before opening a jar?

Alternative Rhubarb & Strawberry  Chia Jam
This recipe uses chia instead of sugar. The chia makes this recipe considerably healthier. But watch it: sugar not only thickens the jam it also lenghtens the shelf life. By using chia the jam has a approximate shelf life of one week and it should be kept in the fridge! So if you're the only one eating it you might think about seriously narrowing down the amounts or be prepared to eat jam and only jam for one whole week.

1. Follow the regular recipe above except don't add the sugar but add the chiaseeds. Stir well.

2. Pour the jam in the jars. Close the jars and let cool down. Store in the fridge for one week. 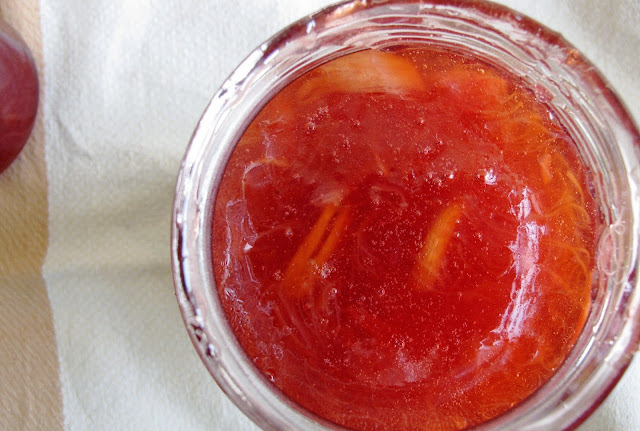