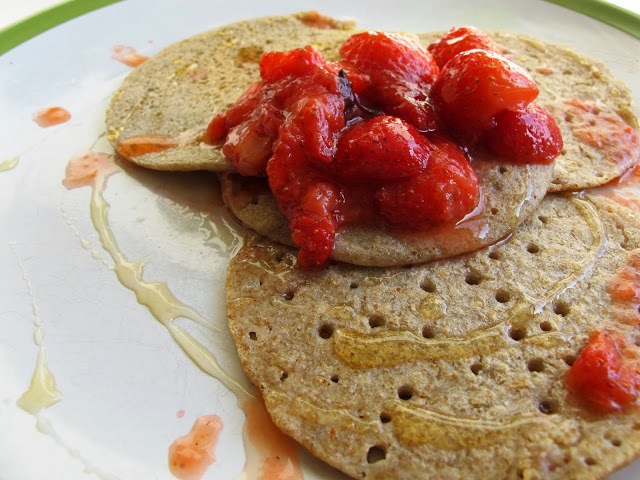 Today it’s Pentecost! With Pentecost we celebrate the descent of the holy spirit. As a child I used to celebrate Pentecrost in red dresses or red turtlenecks on Scottish kilts with red tights and of course my favorite red dress shoes. For the liturgical color of Pentecrost is flaming red. Despite the fact I don’t celebrate Pentecrost in church anymore, the color red returns every year on Whitsunday. If it wasn’t for my wardrobe, then definitely on my plate! As for me the concurrency of Pentecrost and the peak season for strawberries just can’t be a coincidence. I wanted to start my Sunday with pancakes and strawberries. Not just any pancakes, no, I decided to make perfect pancakes made of buckwheat, amaranth, and millet. Because let’s be honest: a celebration like Pentecost deserves more than just wheat flour. Much more! 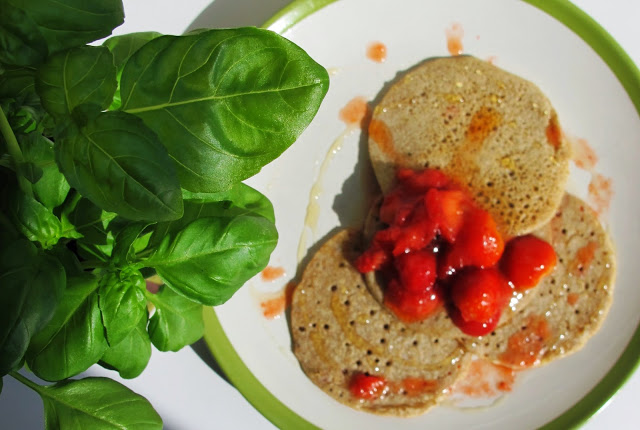 Pancakes are as old as written history itself. The ancient Greek ate pancakes for breakfast made of spelt, olive oil, milk, and honey. After that the pancake became an even bigger hit than democracy: in every far corner of the world you will find regional pancake recipes. In the Netherlands alone we recognise the ‘regular’ pancake, flapjacks, fritters (‘poffertjes’, this really is a Dutch dish so it’s hard to find an English equivalent), and traditional Dutch baby pancakes (‘drie-in-de-pan’, literally three in the pan, because you can bake three of them at once in a large skillet). Aside from these Dutch recipes we also know the French crèpes and the American pancakes.

In Roman Catholic English-speaking countries there actually is such a thing as Pancake Tuesday. It’s the day preceding Ash Wednesday. On this Tuesday people traditionally baked pancakes finishing all the fat before Lent, the forty days of fasting before Easter Sunday. Nowadays schools organise genuine pancake races on Pancake Tuesday: every contestant has to run down a running track holding a skillet with a pancake which he has to flip while running. Losing your pancake means a sure disqualification. Genius tradition if you ask me.

These pancake races can be traced back to 1445. In the little village of Olney in England there lived a housewife. She had a very busy day that Tuesday before Lent. She had to wash the laundry, sweep the floor, make the beds, feed the children, wave the husband goodbye and suddenly she realised she had to bake pancakes as well. She considered. And then she considered some more: the dished had to be done and the garbage had to be taken outside. Maybe she would skip the pancakes this year. But then again, she really couldn’t afford to throw out the last unused fat before Lent. So she decided to multitask: she would do the dishes and bake the pancakes at the same time. While she was busy handling both the dishwashing brush and the skillet suddenly the church bells began to toll. She was baking the last pancake, but she couldn’t leave it on the hot stove, it would certainly burn! In a blind panic – you just can’t be late for church on Shrove Tuesday! – she flung the brush in the sink and took the skillet outside. While running towards the church she flipped the pancake in the skillet: behold the emergence of the pancake race. 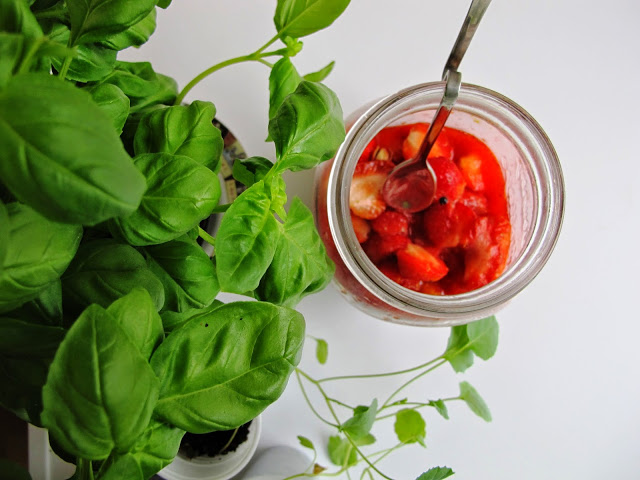 The perfect pancakes in this recipe are made with soaked grains which gives the pancakes an acquired taste. By this time my taste buds are totally accustomed to the special taste of buckwheat, but if you’re a noob you may have to take time to get used to it. Even so, these pancakes are a perfect starting point for you to learn to appreciate buckwheat. Not only are pancakes associated with celebrations, you can also fill them with anything to your liking! It’s a vegan recipe but you can of course experiment using eggs and milk. Be creative! In the spirit of Pentecost I made a red strawberry sauce especially for these pancakes. 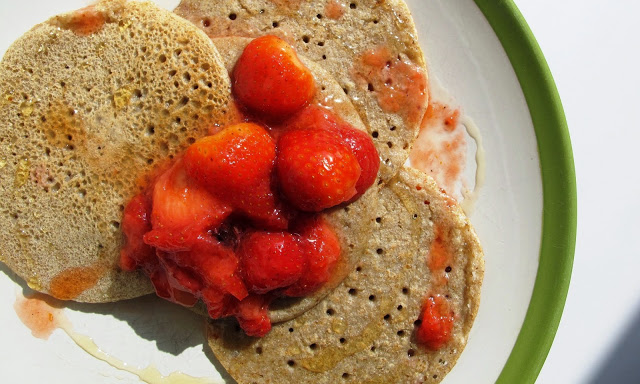 Ingredients
100 gr buckwheat
100 gr whole grains of your choice (quinoa, amaranth, millet)
200 ml water (this is to soak the grains, so do not replace this with milk)
1 tbsp apple vinegar or lemon juice
200 ml water (this water you could replace with milk)
Optional for the batter:
1 egg
50 gr raisins or dried cranberries
Optional topping combinations while baking:
Apple and cinnamon
Banana and coconut

2. In the morning drain and rinse the grains in a very fine sieve. Put grains and water (or milk) in your blender or food processor and blend on high speed until smooth.

3. Heat a skillet on high fire. Add 1 tbsp of coconutoil or sunfloweroil. Make sure the pan is smoking hot before pouring the batter into it. You can choose to make little pancakes (my favorite) of large ones. If your blender has a nice spout you can directly pour the batter out of your blender and into your skillet.

4. Bake your pancakes until they’re golden on each side. You can bake them as gold as you like. I like them crispy and crunchy and as gold as it gets. If you’re using a high quality skillet you don’t have to use oil between every pancake. Serve your pancakes hot with red strawberry sauce and sprinkle them with honey, maple syrop or ginger syrop. 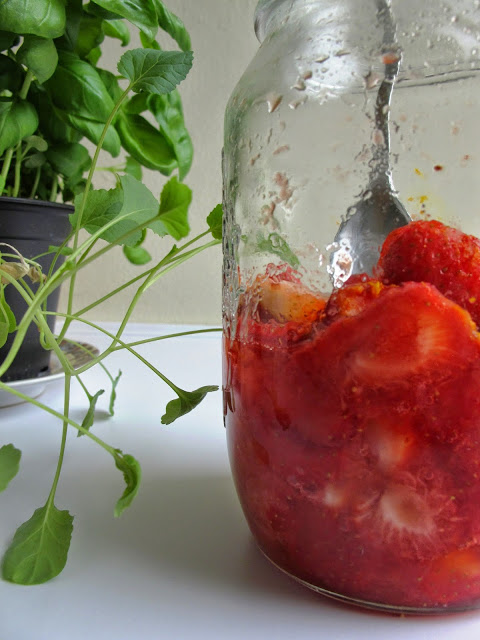 1. Put all ingredients in a jar. Push the strawberries together using a spoon to extract the juices. Stirr well, close the jar and place it in the fridge for about an hour to marinate the flavors. Serve with Perfect Pentecost Pancakes or on toast. Will keep for about 4 days in the frigde.
Posted by Frannie at 12:00
Email ThisBlogThis!Share to TwitterShare to FacebookShare to Pinterest
Labels: BREAKFAST, FRUIT, LUNCH, SPRING, VEGAN